Architects: Showcase your next project through Architizer and sign up for our inspirational newsletter.

Glazed façades are built around light and views. From double skin glazing and low iron glass to fritted glass, glazed facades come in many shapes and sizes. They can also be curtain walls, where non-structural outer walls do not carry any dead load from the building, other than their own weight. More generally, contemporary glazed facades are often built to span multiple floors while addressing lateral loads and sway.

Resisting air and water infiltration, glazed façade systems can provide a way to mitigate environmental conditions while still opening up to the larger context. The following projects showcase a range of contemporary glazed façade details, taking a deeper look at the products, manufacturers and fabricators that bring these projects to life. As a sampling of glazing systems, the projects illustrate different framing and installation types, as well as how modern glazed façades can be specified today. The Novartis project is a 140,000-square-foot oncology office building at Novartis’ North American Headquarters. Five floors of open office work areas are connected by an ascending spiral of “living rooms” with vistas to the generous 230-acre campus. Marked by wood finishes, column free spans, and low-iron glass, the “living rooms” provide a common ground for distinct project groups to interact. The primary work areas are light filled and are configured for maximum flexibility and interdisciplinary collaboration. Clad in a curtain wall of oscillating acid-etched, reflective, and low-iron glass, the building mirrors the landscape and introduces an innovative paradigm for collaborative work. SOM’s design for the JTI Headquarters draws on references from the site’s context, including Lake Geneva and the Alps. The project’s Closed Cavity Façade system was developed as a unique unitized curtain wall responding to the requirements of European Energy Directives and the Swiss Minergie sustainability rating. The CCF system consists of triple glazing on the inner layer and single glazing on the outer, forming a cavity that’s combined with a roller blind. For more details on the CCF system, check out SOM’s detailed explanation on Architizer. After ten years in the making, Herzog & de Meuron’s Elbphilharmonie was completed as a 2,100-seat concert hall in Hamburg. The building complex accommodates a philharmonic hall, a chamber music hall, restaurants, bars, a panorama terrace with views of Hamburg and the harbor, apartments, a hotel and parking facilities. Built on top of a historic warehouse, the upper-area of the structure is wrapped in curved panels of glass that reflect the surrounding city and sky. While a portion of the glass panels are curved and punctured to create openings, others are fritted. Designed by Snøhetta and Zeidler Partnership Architects, the Ryerson University Student Learning Center was inspired by historical gathering spaces such as the Stoas and Agoras in ancient Greece; conceived as a “library without books,” the design facilitates natural conditions for groups of students to interact and collaborate, as well as study independently. The project features an energy-efficient façade, which combines high-performance glass and ceramic digital printing with more than 1,000 panels of Guardian SunGuard SuperNeutral 68 in a triple-glazed assembly. 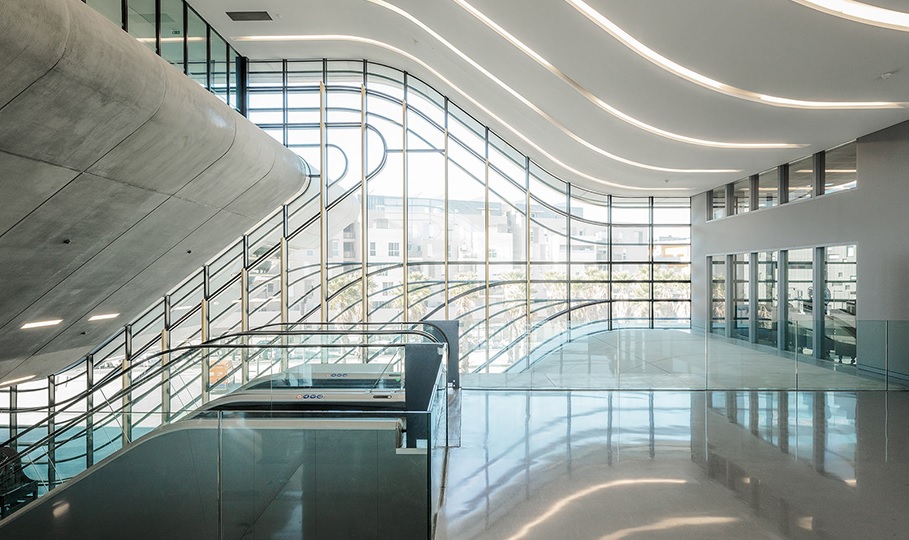 The Pierres Vives building combines an archive, library and sports sector together for the department de l’Herault. Formed around a single continuous envelope, the building creates a fluid identity that’s reflected in glass and opaque surfaces. Over one thousand large precast concrete modules were used to echo the flow of the column-beam structure. Extending between these is a system of curtain walls fitted with Reynaers CW 70 aluminum profiles. This solution was based on the existing CW 50 system. The reconfigured systems called for numerous detailed studies to see how the enveloped façade would work with the assembly of the different, intricately cut concrete shells. For this project, Otxotorena Arquitectos inventively rehabilitated an early twentieth century single-family palace in San Sebastián, Spain. Located on a privileged site with magnificent views, the architects used a striking glass curtain wall to reflect and emphasize the landscape’s dominant presence. From one vantage point, the building is defined by historic moldings and adornments, while from another, the building takes on a starkly contemporary reflective identity. The closed-cavity curtain wall system built by fjmt was a first within the Australian context. The exterior of the building is comprised of a single sheet of clear low-iron glass that hangs in front of a sealed, dust-free pressurized cavity, which contains dynamic timber blinds for shading. Behind the double-glazed system is a robust layer of high-performing insulating glass. In addition, other features include hybrid chilled beams, an all-LED lighting scheme, and an advanced energy-monitoring system alongside the closed-cavity system.

Architects: Showcase your next project through Architizer and sign up for our inspirational newsletter.